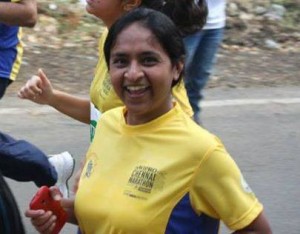 Until a year ago “Running a Marathon” in my mind seemed like a pastime that was in vogue, people had fallen prey to for no reason. Jargons such as “SUB”, “LSD”, “BIB” etc had little meaning or no relevance to me. There was also a time when I thought people ran aimlessly with no purpose behind what they were doing. Least did I think that running was taken so seriously and that in the running world, there were people who ran for targets, for passion, for fitness and above all for contentment.

It was then that I wanted to try my hands (legs to be precise ;-)) with running, with no real intentions of taking to it. I registered for my first event “DRHM 2014” and decided to join a group for training. The group would meet on alternate days at the beach and the training would resume sharp by 5 am. It takes a lot of effort to wake up at 4 am in the morning when the rest of world is in deep slumber. I was a bit sceptical about the whole thing as the thought of running with people who I barely knew felt a bit awkward.

The group was running by the beautiful sea, along the coast of ECR with that being one of the biggest sources of motivation. Some of the group members seemed to be serious while there were others who were beginners like me. I still can’t forget how out of place I was feeling on my first day of training. We started off with some warm up exercises that a few were already familiar with. People were seen making plans on the distance, a 10 k, a 15 k and discussions on routes which made me feel like a complete novice that I was.

One of the members who seemed like the leader of the gang, asked me to run along with the other beginners. It was a straight road that was meagrely lit. I started jogging while the rest of them simply took off in a couple of minutes. In just about 300 metres of my jog, I was struggling to breathe and was panting so heavily that it was evident to all my co-runners.

Now, it’s been over a year since I resumed running and has been a wonderful journey with no regrets. All the training I have been through so far has helped me build endurance to the extent that I can do an uninterrupted 5 km run. I personally enjoy running and being part of the running fraternity that has enabled me to meet new people and make friends for life. Running has helped so many people bond across geographies, cultures and it has this indomitable power to spread happiness & positivity.