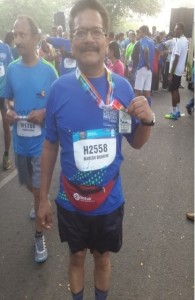 There is always a first time. During my school days, I had read about Marathon – a Greek soldier Pheidippides, was sent from the Battlefield of Marathon to Athens as a messenger to convey the news that the Persians had been defeated in battle. Having just finished the battle, he ran the entire distance non-stop and burst into the assembly, exclaiming, “we have won”, before collapsing and dying. It stirred my soul as a child and got me thinking about the grit and determination of a man who lived so many hundreds of years ago. Generations to follow have celebrated the same spirit. To commemorate this historic run, marathon runs are now organized regularly by various organizations across the globe. Thousands of people participate to celebrate this spirit of perseverance and grit….

The seeds of running were sown in me as a school boy but I started running seriously after I fell ill. I started getting constant headaches due to an unhealthy life style. I had taken life for granted. One evening to my surprise, my wife took me forcefully to the doctor by (as most wives do) who then became very serious at my deteriorating condition. The doctor was appalled to see my pitiable physical and mental health – physically I had become huge and mentally very small. I was not able to tie my own shoe laces and ascending a staircase was as difficult climbing Mount Everest. Mentally I was unhappy, very irritated and irritating. My wife and son had so many complaints about me. I had become very mature and a ‘decorated uncle’ for many young boys and girls. Of course, it hurt me to the core. But I couldn’t help it.

The doctor was in a pensive mood and with an Einstein-like look in his eyes, scribbled a few lines on his letter pad and referred me to Apollo diagnostic center for detailed investigations. The atmosphere became very sullen and somber. I started sweating in the AC room. When I got up to go, my feet were heavy as if tons of load was hanging on my toes, but I had to go before I am gone forever.

The results were shocking. I was informed that I was sitting on a volcano waiting to erupt. I started visualizing the impact of the explosion. On the journey from the clinic to home, there wasn’t any conversation; as if we were already mourning my demise. I started imagining and witnessing my huge dead body and how people would be reacting to it. So many people and so many statements mixed with empathy, sympathy and apathy. I was shell shocked. Lo!!! We had reached home and I was still alive. I pinched myself (Please do not smile… have compassion on my poor nerves!)

My 10 years old son was surprised to see our silence and was curious to know the reason for our unusual frozen silence. So he asked his Mom first who in turn just waved her hand in utter disgust with an angry look on her face and pointed towards me -the ultimate culprit who was ready to be hanged. My son couldn’t fathom the seriousness of this hand signal which he had witnessed for the first time. Then he questioningly looked at me and enquired. I, in sheer frustration and a mood of extracting sympathy from both of them, avoided the query saying “I am going to die any time from now” which made him very emotional and small drops of tears started rolling down his chubby cheeks.

I immediately picked up my shoes and straight away hit the colony road. After that I never looked back. Gradually my long and rigorous walks helped me shed 19 kg and to my great satisfaction, my next medical examination results after one year were fine and within the permissible limits. Then I wanted to regain my youth – my paradise which I had untimely lost long ago. For the past 5 years I have been fit and fine and not afraid of indulging in any kind of luxuries. I eat and drink anything and everything consumed by civilized people with no problems.

After coming to Chennai in October 2015 when I saw people practicing for the Wipro Chennai Marathon, I took my running more seriously and practiced hard to prepare myself for the 21.1 km run (Half Marathon). I started to run 10 km every day. After running 21 KM D2D Marathon on 11th June2016 now I am gearing up to run DRHM Marathon organized by Dream runners on 24th July 2016. The theme “you too can run” is very motivating. Who knows in 2017 I may be with you for the Full Marathon to salute the spirit of Chennai and the undying spirit of its people

Lastly I quote from Katha Upanishad (it was also used by Swami Vivekanand in his lectures) “Arise Awake and stop not till the goal is achieved.”